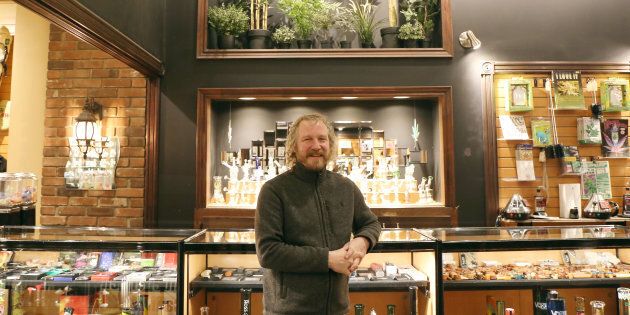 Friendly Stranger's founder, Robin Ellins, inside the Toronto store, has 25 years of experience selling cannabis paraphernalia, but can't sell the actual drug until he gets a licence. He's entered the province's lottery for one of the first 25 cannabis retail licences.

Christine Cohen's inbox was flooded after she said on live TV she was applying for a highly sought-after cannabis retail licence in Ontario's lottery. She says 14 men asked if she wanted to get married and another offered her a cool $1 million for the licence, should she win.

The business owner, who runs two spas in Ottawa, didn't respond to everyone — but she took the time to educate the man who offered to buy her licence. That's against the rules, she told him. Licences are not transferable.

"It's not just jumping in and selling weed. There's a business plan in motion," Cohen told HuffPost Canada by phone from Jamaica, where she owns another spa.

She didn't reply to the marriage proposals, although it made for a good joke with her husband of 40 years. 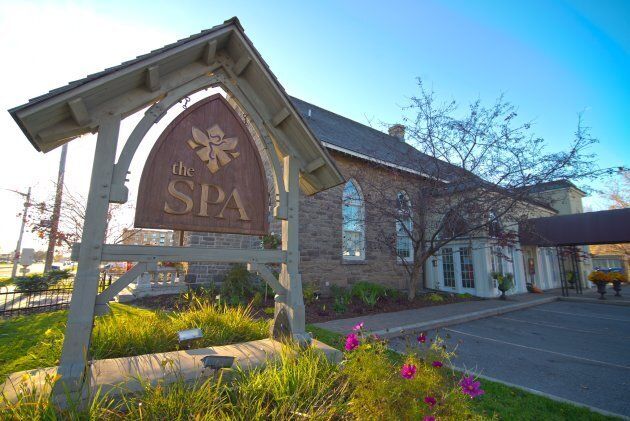 The Spa Ottawa's owner Christine Cohen has entered her name in the province's lottery for one of the first cannabis retail licences.

This week, many small business owners are waiting to see if they've won the province's lottery to get one of first 25 licences. Some told HuffPost they've preemptively sunk hundreds of thousands of dollars into their businesses, paying monthly rent for unused store spaces, hiring cannabis lawyers to help with their applications and developing strategies to set them apart in the fledgling industry. They're investing in cannabis retail, knowing they may not be allowed to sell it for months or even years.

Canopy Growth, the world's largest producer of legal cannabis, did not respond to HuffPost Canada's request for an interview about the lottery in Ontario. National Access Cannabis, which has a deal with Second Cup to convert coffee shops into cannabis stores, could not grant an interview because the company's spokespeople were out of town.

The smaller-scale business owners are crossing their fingers.

Cannabis products are "an extension of what's to come in the wellness industry," Cohen said. A retail licence for cannabis would let her set new precedents in the world of spas, mainly through products that are higher in the chemical CBD rather than the main psychoactive component in recreational pot, THC. These strains are often used to manage anxiety or pain and offer more clear-headed, functional highs.

If she wins a licence, Cohen said she'll open a dispensary at the old stone church she owns in Bells Corners, a suburban area of Ottawa's Nepean neighbourhood, and her regular trips to Jamaica will end for a year. She plans to work as the dispensary's manager to make sure both staff and customers are educated and in compliance with the law.

But Cohen wishes she didn't have to wait for the results of a lottery.

"I don't believe in luck," she said. "If you rely on luck in business, you shouldn't be in business."

Ontario's cannabis retail licence lottery will be the first game of chance Cohen has ever played. She's never bought a lottery ticket or even a scratch card in her entire life.

"I would have preferred to be chosen on merit." 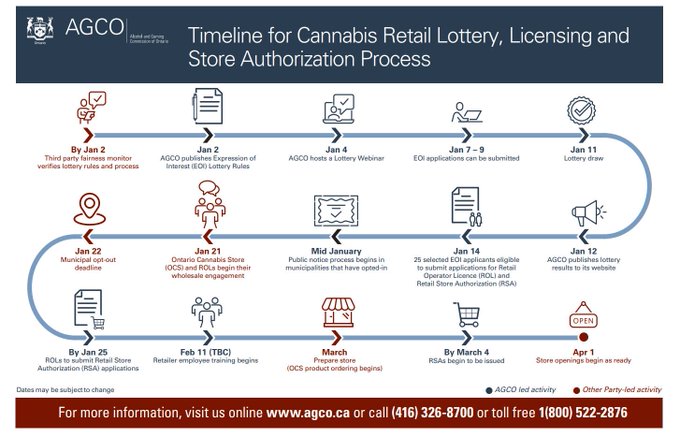 The Ontario government announced in December that it would only hand out 25 retail licences for cannabis. Previously, the Progressive Conservatives said they wouldn't cap the number of pot shops in Ontario, but then changed course, citing a shortage of supply.

The Alcohol and Gaming Commission of Ontario, the Crown agency that also regulates booze and gambling, will announce the lottery winners this weekend. The winners will have five business days to submit an application, $50,000 letter of credit and $6,000 non-refundable fee. Twenty-five shops will open on April 1 and anyone who gets a licence but fails to open a store by the month will face a $25,000 fine.

Ontario's ministry of the attorney general stresses that the lottery system is temporary.

"The government remains committed to moving to an open allocation of store licences to combat the illegal market once we have clarity that there is a sufficient federally regulated supply of cannabis," Ministry of the Attorney General spokesman Brian Gray told HuffPost Canada by email.

He noted that independent auditor KPMG will oversee the lottery process to make sure all parties are treated fairly.

Friendly Stranger owner Robin Ellins says it's frustrating that the government isn't handing out licences based on merit and preparedness.

He's been running the iconic 3,000-square-foot cannabis paraphernalia store in the centre of Toronto's downtown for 25 years and has advocated for the legalization of cannabis for just as long. 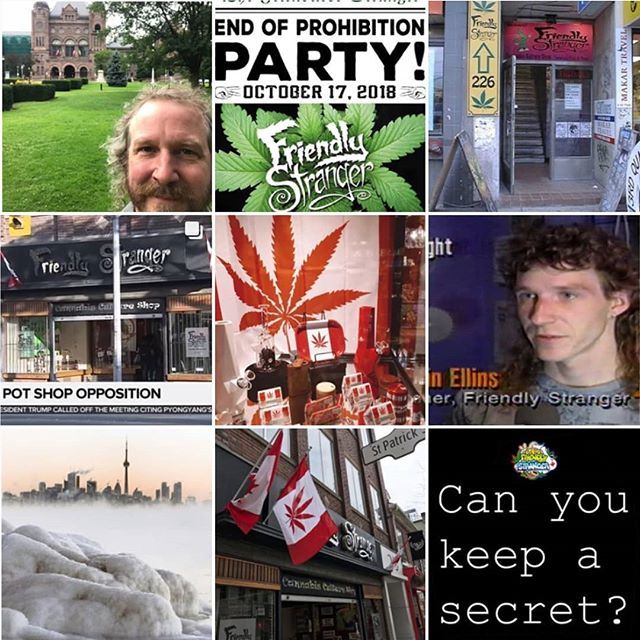 "It would be wonderful if we do [get a licence] seeing as we are one of the players in the game that's been around the longest, and one of the most knowledgeable, but either way we'll get there. We have patience," said Ellins, standing on the shop floor, surrounded by colourful glass bongs and pipes.

In the fall, when the province said it would allow cannabis to be sold privately rather than in government-run stores, and wouldn't restrict the number of licences, Friendly Stranger had announced an aggressive expansion plan to open dozens of more stores across Canada that would sell cannabis. It even secured a $10-million investment from Green Acre Capital.

Now with the province temporarily limiting licences to 25, Friendly Stranger has slowed down its plans and, like every other aspiring cannabis seller who has entered the lottery, is counting down the days until it finds out if it has won a golden ticket.

On the bright side, Ellins said over time the lottery will "weed out" some of the weaker players who aren't able to meet the government's requirements.

By the time the province gets to issuing more licences, "the players that will still be standing will be stronger, and the community will be better served," Ellins said. 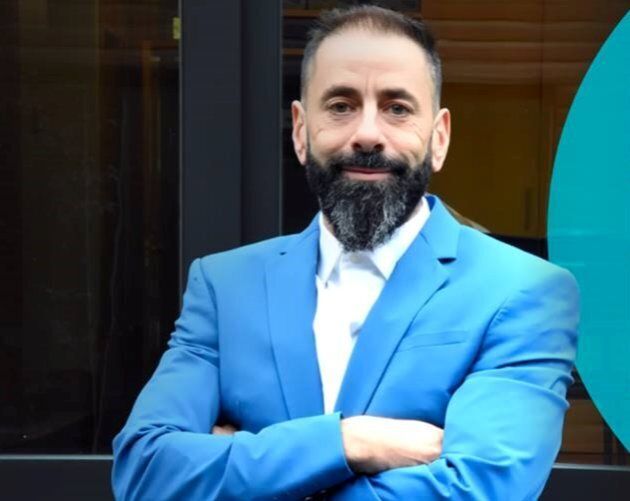 Mark Francis, CEO of Herbalicious, has applied for a cannabis retail licence to open a store focusing on edibles.

Mark Francis, CEO of Herbalicious, has also applied for a licence after months of preparation. He wants to specialize in edible cannabis products with a first location in Toronto, and has put down hundreds of thousands of dollars in developing a business plan and closing a lease that costs $6,000 a month.

The company was also making headway at setting up a few other locations in eastern Ontario with the knowledge that at first there would likely be supply shortages, and Herbalicious might need to restrict its hours to keep its shelves somewhat full. That's a challenge stores in other provinces are facing, and one that Francis is willing to take on, if given the chance.

"We're all adults here. We could see the shortages, but made informed decisions for the long-term," Francis said.